For questions concerning your order in the Triumph Online Shop

(Calls will be charged as local calls from a land line. Prices from mobile phones may vary)

(Calls will be charged as local calls from a land line. Prices from mobile phones may vary)

At Triumph we pride ourselves on making exceptional lingerie. We have been listening to women for over 125 years and we continue to address their needs when it comes to finding the “perfect fit”.
We are truly committed to providing the best design solutions for every woman and, with this in mind, we want to offer a stress-free experience when choosing the perfect bra for every occasion.

Finding the perfect bra is essential for feeling comfortable and supported. Besides creating a lovely cleavage, a good fitting bra means:

Our fitting guidelines help you find the perfect fit and determine the right bra size.

Alternatively, we recommend visiting one of our stores for a free Triumph bra fitting appointment with one of our specialists. Use our Store Locator to find your nearest Triumph store.

HOW TO DETERMINE THE RIGHT BRA SIZE?

There are three variables that you have to take into account when determining bra sizes for women: Under bust width, bust circumference and style that fits to that equation.

We recommend you take the time to make use of our professional bra fitting service in your nearest Triumph store: Store Locator. 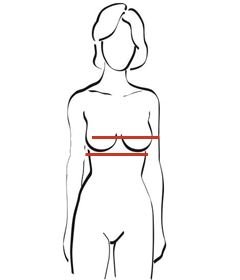 Your new bra fits perfectly, if it suits you like a second-skin without pinching or pain. 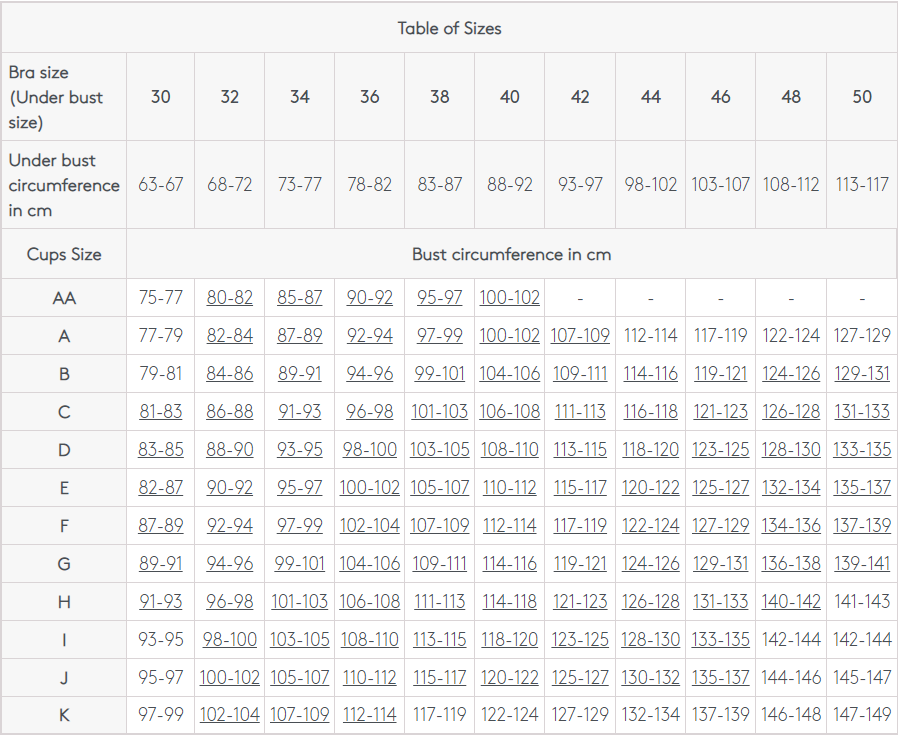 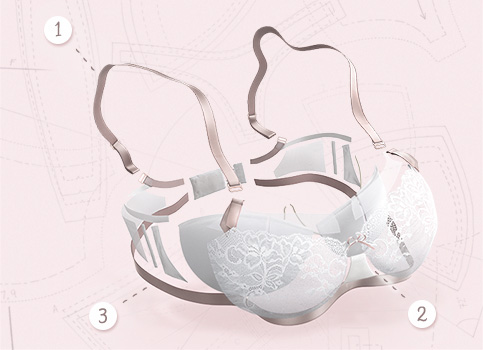 WHAT MAKES OUR FULLER CUP BRAS SO SPECIAL?​

1. The Straps: Decorative and supportive, the straps of our plus sizes bras are specially designed for your individual shape to provide the support you need without digging into your skin.

2. The special 3-D Flexi Wire: Tailored specially for Triumph fuller cup bras, the 3-D Flexi Wire is more supportive and flexible than a normal wire. It adapts to your body giving you a light uplift and a push-in effect for a beautiful and natural décolleté.

3. The under bust band: Carefully designed with the extra support of the side boning, the waistband releases pressure from your shoulders providing you the majority of the support. It is designed to sit firmly around your body without digging in. For extra comfort it has extremely soft hook-and-eye closure.
Those of us with fuller cups shouldn’t need to choose between feeling fully supported and looking beautiful in a stylish bra. That’s why our experts have created the Triumph Fuller Cup Lingerie collection which offers both and is supporting you.
Triumph’s Beauty-Full Dessous collections are beautifully designed to fulfil style and support standards for fuller cups.

HOW TO IDENTIFY THE PERFECT BRA FIT?

When a bra fits perfectly you will feel like a goddess: the bra is comfortable when there’s no pinching or pain, it supports you weightlessly and creates a feminine silhouette. You will love wearing it! And maybe forget it’s even there.
A lot of women do not feel this way. Surveys and studies reveal that most women tend to be wearing the wrong bra type or, more often than not the wrong bra size. We would like to make sure that you feel confident and comfortable in every Triumph bra you wear.
To help guide you through the process, we have gathered the key points which show that a bra fits perfectly. We suggest that you check the fit of the bras in your lingerie drawer according to them: 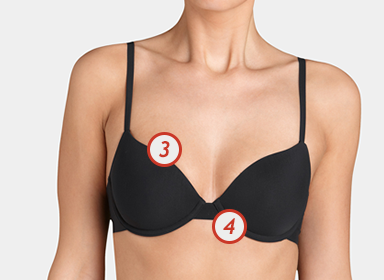 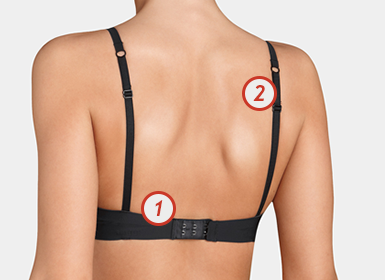 This part of the bra provides the majority of the support so it is important that it fits firmly, parallel to the cups. Look in the mirror and check that the band is at the same level all around your body. You don’t want to have back pain because of wearing the wrong bra size, do you?

They should sit parallel or slightly V-shaped on the back.

The cups of a bra, especially when underwired should go right around the contour of the breast sitting flat against your ribs without digging into the breast tissue. The whole breast should also fit neatly into the cup with no excess of flesh showing on the sides of the cup or spilling out over top. This applies even when wearing push-up or low cut bras. In extreme cases wearing cups that are too small will give the appearance of four breasts. There should not be any space underneath the cups at the root of the breast or any gaping across the top half of the cup.

Before you change the cup size, please make sure that your breasts are completely “dropped” into the cups. Lean a bit forward, lift and jiggle them into the cup and smooth out the sides.

The center front of the bra:

The center front of the bra sits between the breasts and is also called a bra bridge. The bra bridge should lie flat against the body.

If there is a gap between the bra bridge and your rib cage, or the bra bridge sits on top of your breasts, it might mean that the cup size is too small. Try to go up a cup size, keeping the under bust size the same.

In case you discover that the bras in your lingerie drawer do not fit as described, we recommend a professional bra fitting in one of our Triumph stores. The Triumph Store Locator will help you to find the one closest to you.

Nevertheless, every woman is different and no two breasts are exactly the same, so the comfort and fit may also be affected by the type of bra you’re trying on. It might be that a balconette bra fits you better than a full cup bra in the same size, or a wired, padded bra better than a wired bra. Therefore try different bra styles to find your perfect bra fit.